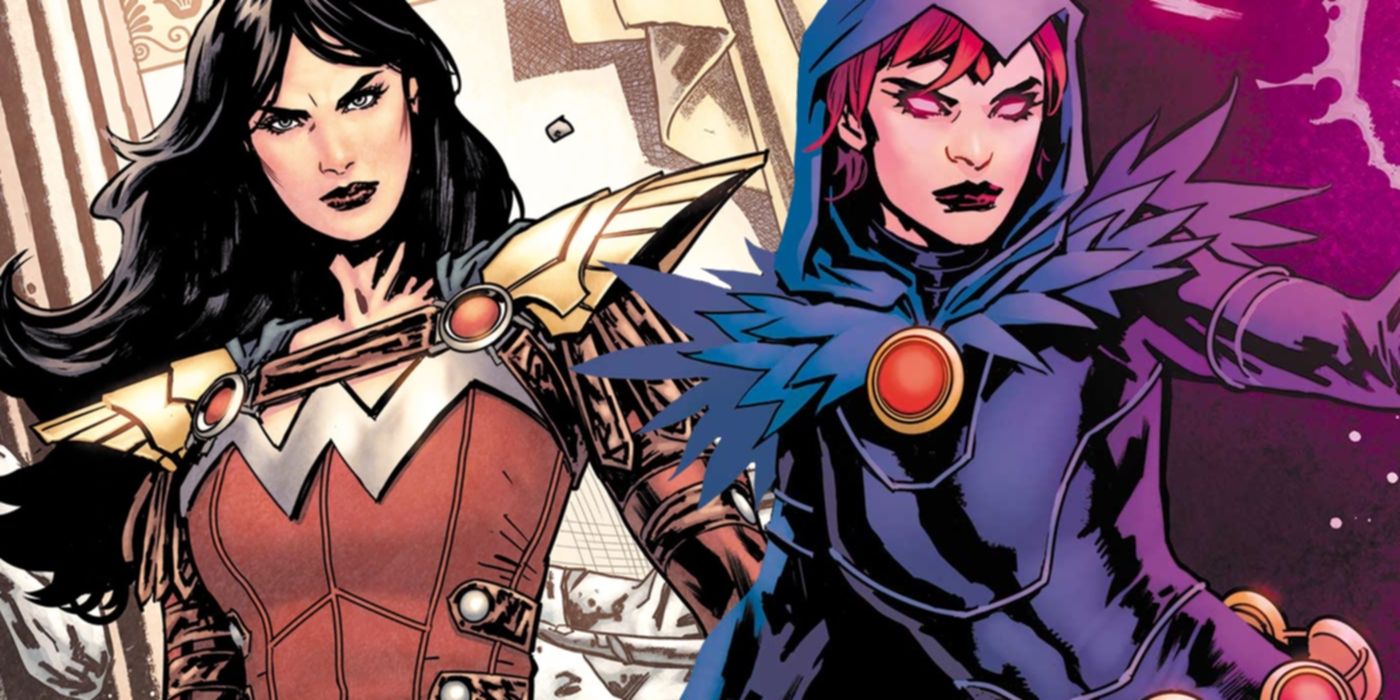 DC has released a series of trading cards to introduce the Earth-11 versions of Teen Titans, and a new romance appears to literally be in the cards.

A couple of DC heroes who have served on the Teen Titans may wind up becoming an actual couple, with a twist. A new series set on Earth-11 will showcase a gender-swapped version of Donna Troy and Raven who have romantic feelings for one another.

DC’s expansive multiverse has long been a home to some creative spins on classic heroes and villains. From a world of reversed morality to an Earth populated by vampiric characters, the alternate worlds are an avenue that open up endless possibilities for creators with new and unique ideas. One such variant is Earth-11, a world where most characters are the opposite gender they are on Prime Earth. The recently announced Multiversity: Teen Justice will feature a team similar to the Titans while also exploring some character dynamics not seen on their Earth Prime equivalents.

Fans who haven’t had the chance to read Teen Justice’s first appearance in DC’s Very Merry Multiverse #1 don’t need to worry. To get readers pumped for the debut of team’s first miniseries, DC has released a series of trading cards featuring the whole crew of young heroes. Robin, Supergirl, Klarienne the Witch Girl, Kid Quick, Aquagirl, Troy and Raven are all shown off in profiles that give readers some quick details on the team members. From backgrounds to secret identities, everything is here to prep new fans and old for the team’s exciting new book. One hidden detail among the information in the cards is a relationship hinted at the Earth-11 variants of Donna Troy and Raven. Donald Troy’s background says his future may lie with “the brooding and mysterious hero called Raven” while Raven’s info mentions “a romantic interest in Teen Justice member Troy“.

It shouldn’t come as a surprise that a queer romance may be a part of Teen Justice’s story, since their series was announced as part of DC’s 2022 plans for Pride Month. It is interesting that a romance is being struck up between variants of Raven and Donna Troy. The two have never been portrayed as a couple on Prime Earth before, but with the endless possibilities the multiverse presents, it’s not that out of the ordinary.

As comics continue their shift towards providing representation for underserved audiences, creating new characters like Teen Justice’s Raven and Troy go a long way to connect with LGBTQ+ fans. Though comics have been critiqued in the past their often homogenous characters, there’s been an explosion of diverse heroes in the last few years that resonate with readers all across the gender and sexuality spectrums. Multiversity: Teen Justice is another step towards progress in comics by introducing exciting characters with their own interpersonal dynamics. The team may not be the only variants of the Teen Titans in DC’s multiverse, but they look to be one of the most interesting yet.

Justin Epps is either a professional amateur or an amateurish professional depending on who you ask. Wanting to break into entertainment journalism, as well as capitalize on his lifelong hobbies, he’s begun taking up writing jobs starting here at Screen Rant. He’s currently based in South Carolina and wondering if it’s humanly possible to type up 600 articles a month.

Previous articleWhat’s next for the UAE as MBZ formally takes the reins?
Next articleIndia bans most wheat exports, adding to concerns of global food insecurity.