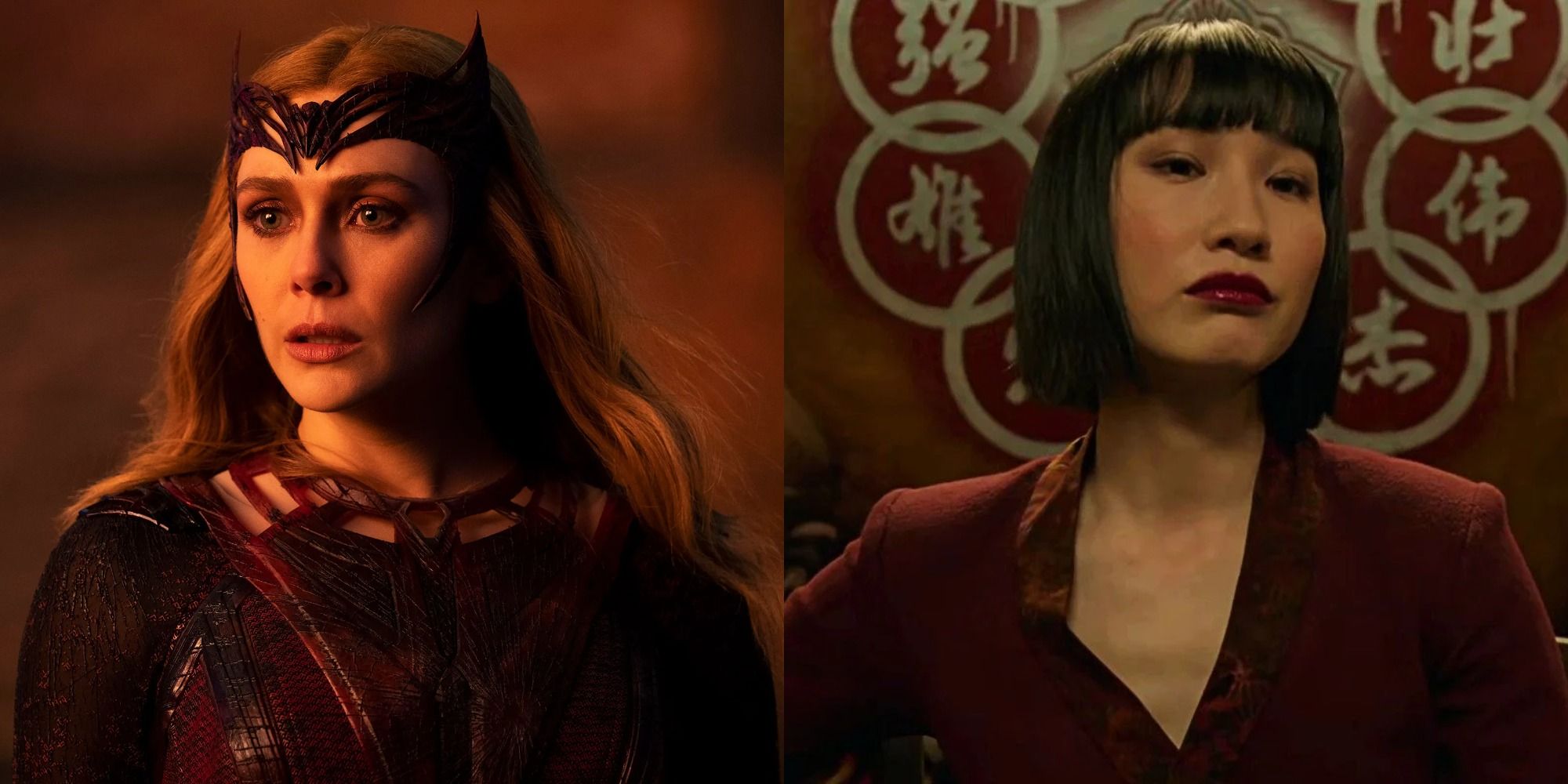 The MCU’s Phase 4 is near the middle of its supposed three-year tenure, and reception to its projects has been mainly positive. The cinematic juggernaut is already showing some cracks in its formula, but Phase 4 has been a significant step forward in character development, especially regarding its female figures.

Indeed, the upcoming releases of Thor: Love and Thunder, Ms. Marvel, and She-Hulk is the perfect reminder of how incredible female characters have dominated Phase 4. Some are new additions to the MCU, while others are previous fan favorites, but they all contribute to diversity and representation in major blockbusters.

As the leader of the Eternals, Ajak has a place of honor among all other characters in the MCU. She’s a mother to the tee, caring about her fellow Eternals while also understanding she needs to give them their freedom. Played with surprising tenderness by Academy Award nominee Salma Hayek, Ajak is crucial to the universal order.

RELATED: 5 Things To Improve In An Eternals Sequel (& 5 To Keep The Same)

Ajak’s stint in the Marvel Universe was short but meaningful. She was the heart of the film, and her untimely death left a hole in the story. Still, the MCU has brought other characters back to life, so there’s hope that fans might see Ajak again in all her spiritual glory.

Zendaya finally received the importance she deserves in Spider-Man: No Way Home. Elevated to a co-starring role opposite Tom Holland, Zendaya’s MJ becomes an integral part of Spidey’s success. Indeed, No Way Home might be the best Spider-Man movie ever, and MJ is a huge reason why.

Resourceful, intelligent, daring but never reckless, and a true ally to Peter, MJ is a nice change of pace considering Mary Jane and Gwen’s damsel in distress roles in the previous trilogy. Her emotional bond with Peter is also stellar, rivaling the love between Peter and Gwen in the Amazing Spider-Man movies.

Angelina Jolie has a career full of unforgettable performances. Thanks to her stunning good looks and enigmatic persona, she became a movie star, but her talent turned her into an icon. Jolie’s best qualities as a performer are on full display in Eternals, playing the mighty Thena.

A warrior suffering from Mahd Wy’ry, Thena is the Eternals’ fiercest warrior. She deals with mental health issues for most of her life, forming a deep connection with Gilgamesh in the process. Thena carries much of the film’s emotional weight, and Jolie is more than up for the task, creating one of the most layered characters in the MCU.

In all honesty, many felt Hawkeye was a mostly forgettable entry in the ever-expanding MCU. Small in scale and harmless in intent, Hawkeye was elevated by only a few moments and characters, most notably Maya Lopez.

Based on the character Echo from the comics, Maya is the adoptive daughter of the Kingpin. Hawkeye introduces her as a young woman on a quest for revenge against Ronin, the man who killed her biological father. Maya is one of the first prominent deaf characters in a blockbuster property, providing some much-needed representation. Elevated by Alaqua Cox’s determined yet vulnerable performance, Maya is a fierce and sympathetic character, and fans will surely see her again.

It was Agatha all along, or so everyone sang in February 2021. Played by the stellar Kathryn Hahn, Agatha is the main antagonist in WandaVision, a witch of impressive ability and considerable experience hellbent on stealing Wanda’s powers. Posing as another victim of the hex, Agatha manipulates the events behind the scenes to slowly unravel Wanda’s already fragile psyche.

RELATED: 10 Characters That Should Show Up In Agatha Harkness’ Disney+ Series

WandaVision was a tremendous success thanks to its blend of genres and themes. Hahn’s take on Agatha is similarly experimental, adding a touch of camp to her otherwise villainous role. The result is a fun and instantly iconic performance that perfectly contrasts with Elizabeth Olsen’s take on Wanda. Fans will see Agatha again when her spin-off, Agatha: House of Harkness, premieres sometime next year.

Moon Knight garnered several unpopular opinions from fans, but the last two episodes made up for the initial mixed reception. Layla — Marc’s wife and the show’s de-facto female lead — played a crucial role throughout the series, proving herself a capable and independent woman who genuinely cared for Marc and, eventually, Steven.

Far from a damsel in distress, Layla was as capable as Marc and as insightful as Steven. When she becomes Taweret’s avatar, her abilities increase exponentially, essentially becoming the MCU’s first Egyptian superhero. Now known as the Scarlet Scarab, Layla’s future in the MCU looks bright and promising.

And speaking of representation, Shang-Chi and the Legend of the Ten Rings was a long time coming. The film introduced several crucial characters to the MCU, but few were more important than Xu-Xialing, Shang-Chi’s sister, who takes over the Ten Rings at the end of the film.

Strong, vulnerable, slightly bitter, but always determined, Xu-Xialing is not only one of the best new characters in the MCU but one of the best female figures in modern blockbuster cinema, period. Xu-Xialing will surely play a prominent role in the future MCU, and fans are already looking forward to her interactions with other characters.

Natasha Romanoff was a tough act to follow, but Yelena Belova pulled it off. Played by Academy Award nominee Florence Pugh, Yelena is Natasha’s dry and sarcastic younger sister and the MCU’s new Black Widow.

Elevated by Pugh’s tender and raw performance, Yelena has been the standout of the two MCU projects she’s been a part of so far. Her personality is unlike any other female figure in the Marvel Universe, making her even more memorable. Pugh’s Yelena has the potential to become a vital part of the next Avenger’s line-up, and it would be hard to argue otherwise.

Loki went all-in on the multiverse concept, introducing multiple variants of the mischievous title character. However, Sylvie has a place of honor, acting as the show’s driving force. An enchantress that has been on the run from the TVA for years, Sylvie is a Loki who’s utterly tired of being Loki.

Sylvie’s connection to Loki is also one of the most daring and intriguing plots in the MCU. Her determination and willpower are impressive, as are her magical powers. Sylvie is the best Loki variant and an exciting new character that can potentially change the MCU as fans know it.

Wanda made her MCU debut eight years ago, and while she was a popular and powerful member of the team, she truly came into her own in Phase 4. Embracing her identity as the Scarlet Witch and her chaos magic, the MCU allowed Wanda to explore the darker side of her persona. Her emotional trauma also received some much-needed development, creating the most layered portrayal of any character in the MCU.

Brilliantly played by Elizabeth Olsen, the Scarlet Witch is a figure unlike any other in the Marvel universe. Broken and struggling to move past the pain, Wanda has endured more pain than most people will experience in a lifetime. Fans can’t wait to see where the Scarlet Witch shows up next, but one thing is sure: her place among the MCU’s best characters is a certainty.

NEXT: A-Force Members In Avengers: Endgame, Ranked By Power

David is a twenty-eight-year-old Mexican writer and reader. Having studied Marketing in school, he spent three years working a nine-to-five desk job before deciding to pursue a writing career. He now works as a Senior Writer in ScreenRant and does some more freelancing job, talking about the entertainment business he so loves. Currently, he’s also writing his second novel while actively working to get his first one published.